Suriname – a South-American country in the north of Brazil at the Atlantic Ocean – is particularly vulnerable to the negative impacts of climate change because of its low-lying coast. Most of the fertile land is along the coast, as well as a concentration of the country’s main economic activities and the majority of the population. Sea-level rise may inundate large parts of this coastal zone.

The impact will be significant and could even be catastrophic for the country. In Suriname’s First National Communication to the United Nations Framework Convention on Climate Change (UNFCCC), the government of Suriname states that sea-level rise will result in “increased erosion, large-scale inundation, loss of fertile land, reduction of freshwater resources, decline of biodiversity, and worsening of human health”. The report goes on to say that “climate change is likely to result in changes in the hydrological cycle, including the intensity and distribution of rainfall, and drought. The combined effect of these changes makes the country vulnerable to climate change.” Experience The farmers of the Saramacca district are already experiencing the loss of fertile land. They can see that the seasons are no longer the same as they were. They have too much water or too little or too much salt water in their agricultural plots. They are seeing their whole crop and their income melt away before their eyes. 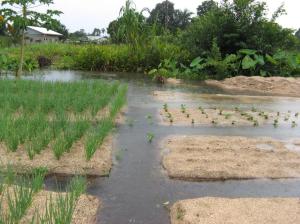 Fifty percent of the production potential has disappeared. This could cause food scarcity for the capital Paramaribo where the majority of the population lives. Saramaca is its feeding ground. Suriname has two seasons: the dry season and the rainy season. In the dry season the level of the ground water decreases, resulting in failed crops, and in the rainy season the agricultural area is flooded, which also means the yields fail. For the dry season the farmers have found a solution by pumping water out of a well, but then salt water bubbles up which damages the crops. For the rainy season they do not have a solution, because they cannot pump water out of their agricultural soil, because of illegal dams that are built in the surrounding area.

“My life depends on the climate,” says Marlene Tima sadly. “Planting is my life. If the plants get water they laugh with me, but now it is dry, so I don’t have water and my crops don’t grow well, and then I don’t have any income.” Mitoe Ramdat has no water at all because of the drought. “I can’t do anything. My blood pressure increased and I don’t have money for the doctor, because my yield is lost.” Ramdat had to leave farming and he now lives from a little government social care which doesn’t give him enough money to eat.

Guno Sanrasid complains that the government does not help them with their agricultural problems and that they themselves have to find a solution. He explained that in the dry season there is not enough fresh water flowing into the sea and stopping the sea from coming in. So the salty sea water is flowing into their wells from below; in the rainy season the sea is still invading via the fresh water rivers—the brackish water of the rivers come out of their branches into their agricultural soil. “In the dry season we save our money to be able to eat in the rainy season, because we cannot plant in the rainy season because of the abundance of water in our agricultural ground,” said Brian Kartodirijo. 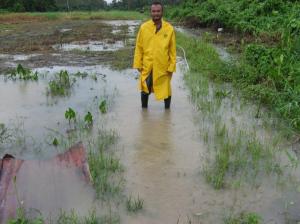 Help?
The Caribbean Institute tries to help the farmers of Saramacca. This institute is a social enterprise promoting integral sustainable development in the Caribbean, through modeling and implementing a whole systems approach to community development, social change, management and environmental protection. Its Saramacca project is a five-year multi-stakeholder, multi-partner and multi-donor system-wide intervention to promote food safety and income security in Surinamese horticulture.

The goal of this project is to assist small vegetable farmers in Saramacca to make the transition to organic agriculture for the national and international markets. An important part of the project is therefore the development of a sustainable agro supply chain to help farmers move away from conventional agriculture—which is rapidly losing market share in overseas markets and is detrimental to the environment and health—to organic agriculture. “But now we have other problems, ” said Maureen Silos, founder and executive director of Caribbean Institute, “We first have to create systems of rain water reservoirs for the farmers, so that they have enough water for their crops in the dry season. But for the rainy season the whole infrastructure of illegal dams has to be restructured and we need a lot of money to do that.”

The Adaptation Fund of UNFCCC could be a solution for the farmers if the Surinamese government submits a project proposal to the adaptation fund. “We are dealing with governments,” said Rob Lake representative of the Adaptation Fund Board at the introduction of the Adaptation Fund during COP15. “If we look at the development of our projects we expect that they participate in the development programs which mean that those who are affected by climate change should also have been thought of in those development projects and programs. Of course we cannot ensure that all governments behave like this. We do know that there are many climate change NGO’s and organizations in those countries who are able to make their voices heard. This is very important because if those who are affected are not involved in the projects you will not end up with good profits and good results.”

The adaptation fund was specifically initiated to assist developing countries who are parties to the Kyoto Protocol and who are particularly vulnerable to the adverse effects of climate change. The Fund will be used to help meet the costs of adaptation and to finance concrete adaptation projects and programs that are country driven. Up to now there is US$ 34 million in the fund but the expectations are that by 2012 there will be US$ 500 million.

Posted by rvanderkooye2014 on December 17, 2009 in Caribisch Gebied