Segregation! I had never heard of this word until the professors of Scripps School of Journalism brought the SUSI-scholars to the Martin Luther King (1929 – 1968) national historic site in Georgia/Atlanta. There I have learned that under segregation two different and isolated social worlds awaited black and white Americans, beginning in their childhood. Segregation was intended to send a strong lifelong psychological message: black people were inferior to whites and should be kept separated. 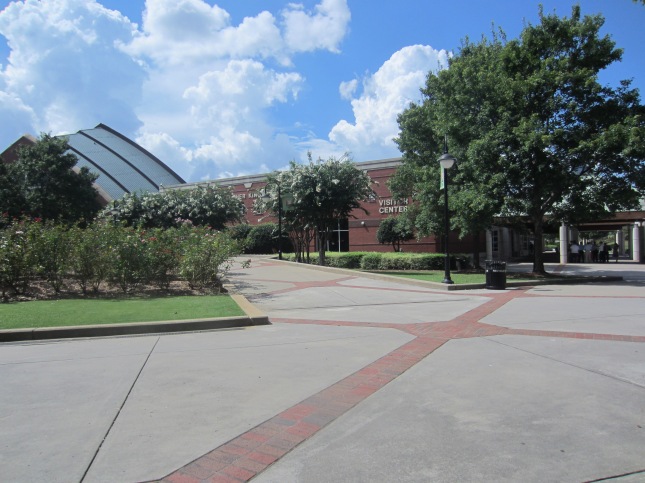 One of the many ways in which white society controlled black people psychologically and physically was to ban them from public accommodations along the highways. Throughout much of the United States, until the civil rights movement, parks, transportation, rest stops, hotels and restaurants that admitted blacks were few and far between. Segregation functioned as an 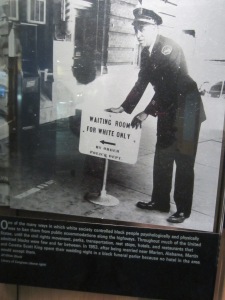 economic system, whose basic purpose was to force blacks to work for whites at low wages. Few black families, particularly in the rural South could scrape together enough to buy their own farms and businesses. Many businesses and neighborhoods were closed to black people. So African American responded by creating their own communities. From banks and barbers to Lawyers and churches, lunchrooms, shops, shoemakers, many thriving blacks neighborhoods provided vital services and support.

Also public schools were closed for blacks, so they built their own schools. But the challenges confronted a black teacher in a segregated rural school were hard. A one room cabin without insulation or central heating accommodated dozens of children, ranging in age from six to eighteen. They shared one teacher and a small number of outdated text books. Such conditions persisted for 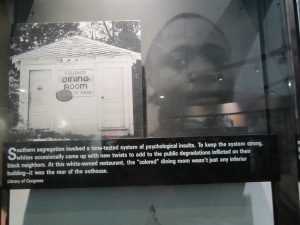 generations after the whites in the same communities had built modern, well equipped schools for their own children. Today in some communities there are still inequities in the educational opportunities offered to with and non-white American children. But these cannot be compared to the differences under legal school segregation, which was wide spread throughout the United States, until 1954, when the Supreme Court ruled that segregation in public schools violates the constitution.

Most cities integrated their schools without a fight, but still the blacks were not allowed in some spaces such as lunch rooms. Most students were nervous on the first day on school, because they were met by hate-filled mob shouting racists insults and threats. Also white families boycotted classes in protest, but the youth stood up for their rights in small and large towns, in college campuses and city streets. Each non violent protest inspired others, weaving a web of activism that spread across the South and across the nation. College students, teenagers and even little kids became civil rights 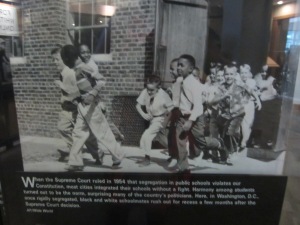 activists. In towns and cities across the country they helped shape a movement – and change a nation. They integrated schools and organized sit-ins. They endured name-callings, fire hoses and beatings to march for justice. They marched along side King and stood up to segregation.

The dead of King

Dr. King’s focus and concern was onto the living conditions and economic injustices suffered by the working poor in the United States. Rally’s, marches and protests were organized against inequity. The 1963 ‘March on Washington for Jobs and Freedom’ put economic opportunities for all Americans out front as a goal. King was determined to show that segregation was just one aspect of economic and class bondage that entrapped poor whites and black alike. The march was one of the largest demonstrations in American history, attracted an integrated crowd 250.000 and 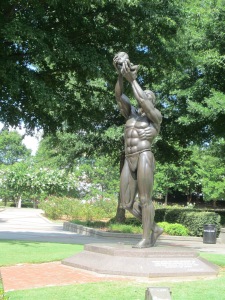 This Behold sculpture commemorates the heroic principles that guided the life and work of Dr Martin Luther King Jr. On January 11, 1990 rs Coretta Scott King unveiled this monument as a tribute to her late husband and as an inspiration to others to fight for dignity, social justice and human rights. Pattrick Morelli’s sculpture reflects the ancient African ritual of lifting a new born child and reciting these words: Behold the only thing greater than yourself.

hundreds celebrities. On april 4, 1968 Martin Luther King Jr was gunned down on the balcony of the Lorainne Motel as he prepared for diner at the home of Rev. Billy Kyles. Within one hour he was officially pronounced dead at St. Josephs Hospital in Memphis.

Segregation makes me think of apartheid in South Arfica. Apartheid was a former policy of segregation and political and economic discrimination against non-European groups in the Republic of South Africa, enforced through legislation by the National Party governments of South Africa (1948 – 1994). Under these governments the rights of the majority black inhabitants of South Africa were curtailed and white supremacy and Afrikaner minority rule was maintained. Apartheid was developed after World War II and was practiced also in South West Africa, which was administered by South Africa under a League of Nations mandate (revoked in 1966), until it gained independence as Namibia in 1990. Racial segregation in South Africa began in colonial times under Dutch and British rule. The official abolishment of Apartheid occurred in 1990 with repeal of all Apartheid laws, after the 1994 democratic general elections.

Posted by rvanderkooye2014 on August 3, 2012 in Internationaal