05 Dec
Women’s organizations at the UN climate talks in Poland, COP14, are concerned about the treaty which underlies the meeting, the United Nations Framework Convention on Climate Change, because they say the convention has no human face and no social dimension. They say that it is one of the few global conventions in which women and gender issues are not mentioned, and that it therefore clashes with other UN conventions such as that on biodiversity.

Women now want to make sure that they are included in the agreement which is expected to be reached a year from now at the next round of climate talks, in Copenhagen. In COP14 many are now working as a team to make sure that gender issues are incorporated in the climate agreement expected from Copenhagen to replace the present global climate treaty, the Kyoto Protocol. “Many studies have been done… including after recent disasters – which prove that the impact on women is great”, said Monique Essed-Fernandes, interim director of the Women’s Environment and Development Organization (WEMO) http://www.wedo.org/ “Women are also the ones who know the best how to adapt to the impact of climate change. They are the ones who plant. They are the ones who take the decisions. Who decides to save energy by telling the children to turn off the light? Women.”

Commonsense
According to Tracy Raczek, the public affairs specialist of UNIFEM, the United Nations Development Fund for Women, it is basically commonsense to include all stakeholders in the negotiations of COP14, including women and women’s concerns. “Women’s potentials and contributions should be included, because we they are half the world’s population, so they have half the skills, half the needs 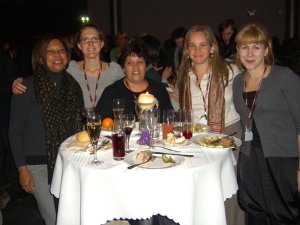 and if their needs are incorporated and they are allowed to contribute in the decision-making process the entire negotiations will be more productive, adaptation policies will be more effective, and mitigation networks will be more effective,” she said.
Work plan
The women’s organizations have a large work plan and one of the topics they are working on is to provide an orientation for UNFCCC delegates on the issue of gender and climate change. “We had a training session yesterd,”said Rebecca Pearl, coordinator at the Global Gender and Climate Alliance (GGCA) http://www.gender-climate.org/ ,”where we brought forty delegates together and we taught them about what are the gender implications of adaptation, what does that mean in terms of when a disaster hits. What are the gender implications when men and women have different responsibilities on the ground? And mitigation, men and women have different roles in the area of mitigation. For instance there are a couple of initiatives happening where women are planting trees and also doing energy projects that could be contributing to reducing emissions.”
Next Week’s Meeting
Next week during the high level segment of COP14 women will have a meeting with women ministers of environment, who were brought together in WEMO by Gro Brundtland, a Norwegian politician and international leader in sustainable development. She now serves as a special envoy on climate change for the United Nations Secretary-General Ban Ki-moon. The women will talk about financing mechanisms, because they reckon with the fact that women are playing a role in the UNFCCC and that they have to be included in adaptation and mitigation. Wangari Matai, Nobel Prize winner and one of the founders of WEDO, will share her vision on this area via a video conference.

Posted by rvanderkooye2014 on December 5, 2008 in Caribisch Gebied